Boden has hired a new CEO, Bill Gass to oversee the company’s future. Gass has an extensive background in team development across a wide variety of agricultural technology companies. Gass will build a team of specialists around the technology in the coming weeks and months. Tomm will remain involved as an owner, engineer and farmer-customer.

The company will have a handful of beta models running in fields as early as next week. Tomm’s prototype was shown to be effective during the Tulane Nitrogen Reduction Challenge . Tomm has also used the electroporation process on his family farm with strong results. Boden will invest in additional plot work and seeks early adopter farmers for further testing throughout 2018. 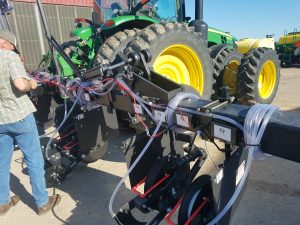 “I have enjoyed sharing this technology with a variety of farmers and potential investors ” said Bryan Tomm. “I believe Little Engine Ventures has the background to take the company to the next phase and beyond. I want to farm and they have provided me with an opportunity to stay involved at a sustainable level for the foreseeable future.”

Little Engine Ventures’ CEO Daryl Starr has a deep background in agricultural systems. He founded a management consulting firm for professional farmers that later developed optimization software for their independent use.  The company expanded quickly and was later acquired.

“Bryan’s technology is straight forward and yet has a significant potential impact on the farm,” Starr said. “I am excited to help him realize the vision for the product.”

Little Engine Ventures  is a private investment partnership located in Lafayette, IN. The partnership makes investments across a diverse range of industries.