The first room in the LEV office has three, floor-to-ceiling walls of built-in bookshelves.  The other wall has windows.  Rather than have the bookshelves ripped out and replaced with a single Amazon Kindle, we decided to populate the shelves with books (and other trinkets.)

If you want to see and learn about the trinkets, come on over.  For our library, we thought it could be valuable to share here.  We’ll try to update this post as the list grows.  It also helps us recall what books we have lent out and have not yet returned to us (and may require replacement!)

Please feel free to comment with suggested books or links to your library for our consideration. 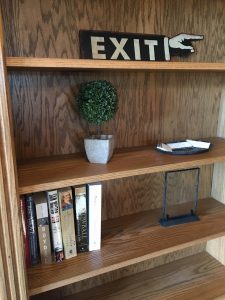 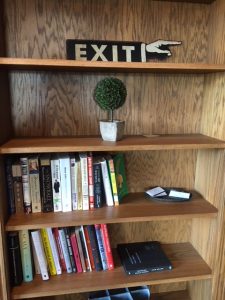 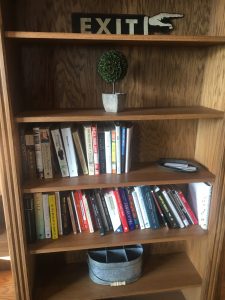 Biographies:
A Fantastic Ride by Bob Rohrman
Am I Being Too Subtle? By: Sam Zell
A Million Miles in a Thousand Years: How I Learned to Live a Better Story by Donald Miller
Benjamin Franklin by Walter Isaacson
Beyond the Pale: The Story of Sierra Nevada Brewing Co. by Ken Grossman
Billion Dollar Whale by Bradley Hope & Tom Wright
Boyd, The Fighter Pilot Who Changed the Art of War by Robert Coram
Bonhoeffer: Pastor, Martyr, Prophet, Spy by Eric Metaxas
Brewing Up a Business: Adventures in Beer from the Founder of Dogfish Head Craft Brewery by Sam Calagione
Cable Cowboy: John Malone and the Rise of the Modern Cable Business by Mark Robichaux
Charlie Munger, The Complete Investor by Tren Griffin
Churchill and Orwell: The Fight for Freedom by Thomas E. Ricks
Delivering Happiness, Tony Hsieh by Tony Hsieh
Dream Big: The Brazilian Trio Behind 3G Capital by Cristiane Correa
Elon Musk by Ashlee Vance
Hillbilly Elegy by J.D. Vance
How to Get Rich: One of the World’s Greatest Entrepreneurs Shares His Secrets by Dennis, Felix
How Did You Do It, Truett?: A Recipe for Success by Truett Cathy
Leonardo da Vinci By: Walter Isaacson
Long Walk to Freedom: by Nelson Mandela
Of Permanent Value: The Story of Warren Buffett by Kilpatrick, Andrew
Pour Your Heart Into It: How Starbucks Built a Company One Cup at a Time by Schultz, Howard
Richard Branson, The Virgin Way by Richard Branson
Rise Above, How One Man’s Search for Mobility Helped the World Get Moving by Ralph W Braun
Sam Walton, Made in America by Sam Walton with John Huey
Shoe Dog: A Memoir by the Creator of Nike by Phil Knight
Sons of Wichita: How the Koch Brothers Became America’s Most Powerful and Private Dynasty by Schulman, Daniel
Steve Jobs by Walter Isaacson
Still Foolin Em: by Billy Crystal
Surely You’re Joking, Mr Feynman! by Richard P Feynman
The Education of a Value Investor: My Transformative Quest for Wealth, Wisdom, and Enlightenment by Guy Spier
The Everything Store, Jeff Bezos and the Age of Amazon by Brad Stone
The Fish That Ate the Whale: The Life and Times of America’s Banana King by Cohen, Rich
The Snowball, Warren Buffet and the Business of Life by Alice Schroeder
Titan: The Life of John D. Rockefeller, Sr. by Ron Chernow

Economics:
100 Baggers Stocks That Return 100-to-1 and How to Find Them by Christopher W. Mayer
Adaptive Markets: Financial Evolution at the Speed of Thought by Lo, Andrew W.
Bommerang: Travels in the New Third World by Michael Lewis
Common Stocks and Uncommon Profits by Philip A. Fisher
Competitive Advantage by Michael E Porter
Financial Intelligence, Revised Edition: A Manager’s Guide to Knowing What the Numbers Really Mean by Karen Berman
Fortune’s Formula by William Poundstone
Freakonomics by Stephen J Dubner, Steven D Levitt
Human Action by Ludwig von Mises
Intelligent Investor by Ben Graham
Irrational Exuberance: Revised and Expanded Third Edition by Shiller, Robert J.
Islands of Profit in a Sea of Red Ink by Jonathan LS Byrnes
Poor Charlie’s Almanack: The Wit and Wisdom of Charles T. Munger, Expanded Third Edition by Peter D. Kaufman
One Up on Wall Street by Peter Lynch with John Rothchild
The Coming Jobs War by Jim Clifton
The End of Theory: Financial Crises, the Failure of Economics, and the Sweep of Human Interaction by Bookstaber, Richard
The Great Crash of 1929 By: John Kenneth Galbraith
The Misbehavior of Markets: A Fractal View of Financial Turbulence by Mandelbrot, Benoit
The Road to Serfdom: Fiftieth Anniversary Edition by F.A. Hayek
The Search for God and Guinness: A Biography of the Beer that Changed the World by Stephen Mansfield
The Wealth of Nations (Modern Library) by Adam Smith
What Works on Wall Street, Fourth Edition: The Classic Guide to the Best-Performing Investment Strategies of All Time by James P O’Shaughnessy
Work Less, Live More by Bob Clyatt

Geography and Travel:
Zen and the Art of Motorcycle Maintenance by Robert M Pirsig

Law:
Has Man a Future? by Russell, Bertrand

Literature, rhetoric & criticism:
ABC of Reading by Pound, Ezra (January 17, 1960) Paperback by Pound, Ezra
Animal farm: A Fairy Story by George Orwell
Bird by Bird: Some instructions on Writing and Life: by Anne Lamott
Don Quixote (Adapted for Modern Listeners) By: Miguel de Cervantes Saavedra
Faust in Plain and Simple English: First Part of the Tragedy: (A Modern Translation and the Original Version) by von Goethe, Johann Wolfgang
Self Reliance By: Ralph Waldo Emerson
Steppenwolf By: Hermann Hesse
The Odyssey (Signet Classics) by Homer
The Writing Life By: Annie Dillard

Mathematics:
Innumeracy: Mathematical Illiteracy and Its Consequences by John Allen Paulos
Relativity: The Special and General Theory (100th Anniversary Edition) by Albert Einstein
The Fractal Geometry of Nature by Benoit Mandelbrot
The Principia: The Authoritative Translation and Guide: Mathematical Principles of Natural Philosophy by Issac Newton
The Signal and the Noise by Nate Silver

Psychology:
A Complaint Free World by Will Bowen
A Technique for Producing Ideas: The simple, five-step formula anyone can use to be more creative in business and in life! By James Webb Young
Antifragile: Things That Gain from Disorder by Nassim Nicholas Taleb
As a Man Thinketh by James Allen
Blink by Malcolm Gladwell
How to Think by Alan Jacobs
How to Win Friends & Influence People by Dale Carnegie
Influence, The Psychology of Persuasion by Robert B Cialdini, PhD
Life is a Series of Presentations by Tony Jeary
Meditations by Marcus Aurelius
Mistakes Were Made (but Not by Me): Why We Justify Foolish Beliefs, Bad Decisions, and Hurtful Acts by Tavris, Carol
Moonwalking with Einstein: The Art and Science of Remembering Everything by Joshua Foer
Predictably Irrational by Dan Ariely
The Craving Mind: From Cigarettes to Smartphones to Love by Judson Brewer and Jon Kabat-Zinn Ph.D.
Quiet: The Power of Introverts in a World That Can’t Stop Talking by Susan Cain
The 8 Dimensions of Leadership: DiSC Strategies for Becoming a Better Leader by Sugerman, Jeffrey
The Geography of Genius: Lessons from the World’s Most Creative Places by Weiner, Eric
The Obstacle is the Way by Ryan Holiday
The Power of Habit by Charles Duhigg
The Road Back to You: An Enneagram Journey to Self-Discovery by Ian Morgan Cron
The Speed of Trust by Stephen M. R. Covey
The Storytelling Animal by Jonathan Gottschall
The World as Will and Idea by Arthur Schopenhauer
Thinking Fast and Slow by Daniel Kahneman
Tribes by Seth Godin
When: The Scientific Secrets of Perfect Timing by Daniel H. Pink

Public administration & military science:
The Complete Works of Aristotle, Volume 1, The Revised Oxford Edition
The Art of War by Sun Tzu, by Samuel B. Griffith, by B. H. Liddell Hart
The Republic (Amazon Classics Edition) by Plato

Social & ecclesiastical theology:
Business by the Book by Larry Burkett
Business for the Glory of God: The Bible’s Teaching on the Moral Goodness of Business by Grudem, Wayne
Crazy Busy by Kevin DeYoung
Culture Making: Recovering Our Creative Calling by Crouch, Andy
Garden City: Work, Rest, and the Art of Being Human by John Mark Comer
God at Work (Redesign): Your Christian Vocation in All of Life by Gene Edward Veith Jr.
Joy for the World: How Christianity Lost Its Cultural Influence and Can Begin Rebuilding It by Greg Forster
Kingdom Calling: Vocational Stewardship for the Common Good by Amy Sherman
Managing God’s Money by Randy Alcorn
Radical: Taking Back Your Faith From the American Dream by David Platt
Rescuing Ambition by Dave Harvey and C.J. Mahaney
Risking It, An Intersection of Faith & Work by Tim Hoerr with Alyssa Kolb
The Babylonian Captivity of the Church by Martin Luther
The Hero with a Thousand Faces (The Collected Works of Joseph Campbell) by Joseph Campbell
The Upanishads (Penguin Classics) by Anonymous
Under the Banner of Heaven by Jon Krakauer
Visions of Vocation: Common Grace for the Common Good by Steven Garber
Work Matters: Connecting Sunday Worship to Monday Work by Tom Nelson

Social problems & social services:
A Framework for Understanding Poverty by Ruby K Payne
When Helping Hurts: How to Alleviate Poverty without Hurting the Poor by Brian Fikkert
Big Mistakes: The Best Investors and Their Worst Mistakes by Michael Batnick
Common Sense: The Rights of Man and Other Essential Writings by Thomas Paine

Social sciences, sociology & anthropology:
The Confessions of Jean-Jacques Rousseau (Dover Thrift Editions) by Jean-Jacques Rousseau
The General Theory of Employment, Interest and Money by John Meynard Keynes
The Prince by Niccolo Machiavelli
Enchanted Objects by David Rose
Extreme Ownership: How U.S. Navy SEALs Lead and Win by Jocko Willink & Leif Babin
Extraordinary Popular Delusions and the Madness of Crowds and Confusion by Joseph de la Vega, Charles Mackay, Martin S. Fridon
On Grand Strategy by John Lewis Gaddis
On the Duty of Civil Disobedience by Henry David Thoreau
Scale: The Universal Laws of Growth, Innovation, Sustainability, and the Pace of Life in Organisms, Cities, Economies, and Companies by West, Geoffrey
Society Of The Spectacle by Guy Debord
Switch, How to Change Things When Change is Hard by Chip Heath & Dan Heath

Sports, games & entertainment:
For the Win: How Game Thinking Can Revolutionize Your Business by Werbach, Kevin

Thanks for scrolling. Come back anytime or stop by in person.

2 thoughts on “The LEV Library”